Willow has been pigeon holed as "that headache herb" but it actually has a wide range of uses, both medicinally as well as utilitarian uses. Willow grows prolifically in the northern hemisphere, making it a wonderful plant for herbalists to get to know intimately.
Botanical name: Salix spp. (Salix alba and Salix nigra are often used)
Plant Family: Salicaceae
Plant energetics: Cool, dry and bitter
Parts used: Mainly bark, although some also use leaves, and roots
Plant properties: febrifuge, anti-inflammatory, analgesic, digestive, diuretic, astringent, vermifuge


Historical Usage
Willow has been used for thousands of years by people all over the world. The Chinese use various species, it has had widespread use all over Europe and there are many historical ethnobotanical uses of it in North America, including the Cherokee, Iroquois, Inuit and other tribes in the southwest. It wouldn’t surprise me if willow was used in some manner by most peoples who had access to it.


Aspirin
In modern days willow is often referred to as the aspirin plant because it contains salicylic acid. This over-the-counter drug is an extract of salicylic acid combined with acetyl chloride and was patented by Bayer in 1900. It has been the number one selling western pharmaceutical for decades.
The name aspirin came from the following:


Herbalist Paul Bergner shares this about the relationship between willow and aspirin.
Willow Bark (Salix spp.) This is the medicinal plant genus after which the salicylates were named. It is the classic anti-inflammatory herb. Its chief active ingredients are the glycosides salicin and salicortin. These are converted to salicylic acid in stages in the intestine and liver. It is ironic that in attempting to improve on this plant, pharmacologists eliminated one of its chief virtues—that it produces salicylic acid in the body safely past the digestive tract, where the acid itself can cause ulceration. Willow bark is slower acting than aspirin, sometimes taking several days before the conversion to salicylic acid is sufficient to relieve pain. The salicylic acid is excreted in the urine, making this an herb of choice for urinary tract inflammations.


Modern and Historical Applications
Willow can be used in similar ways to aspirin, although it tends to be more specific and less of a broad spectrum analgesic. A good example of this is seen in using willow for headaches. Herbalist 7Song reports the ways he uses willow bark.


I find it useful when the headache pain is not too intense and it’s hard to pinpoint its source. It is also good for people who rarely get headaches (lucky them).


Willow is cool and dry and as a febrifuge or antipyretic it can be used as a relaxing diaphoretic when someone has a high fever and feels hot.


Historically it was used in serious infections like malaria and typhoid. It was considered specific for intermittent fevers or fevers that come and go. It is also frequently used for constant diarrhea like dysentery.


Willow bark is a strong anti-inflammatory herb. It can be added to formulas for people with musculoskeletal pain such as various types of arthritis and even gout.


7Song recommends this herb mainly as an anti-inflammatory. He uses it frequently to increase comfort during a cold or flu. As an astringent herb with some antimicrobial properties the decoction of the bark makes a good gargle for sore throats.


Keeping in mind its cooling, astringent and antimicrobial properties you can soon see a variety of ways it can be used. Examples include mouth infections with spongy gums, or as a poultice for wounds.  King’s American Dispensary discusses its use specifically for gangrene infections.


Willow bark has also been used as a bitter tonic to stimulate digestion as well as a vermifuge to rid the body of parasitic worms.


Instead of thinking of this as the aspirin plant, I think of this plant as one that drains damp heat and can tighten and tone lax tissues. With this in mind we use it for hot moist conditions with lax tissues such as those discussed above.


Most willows can be used in the same way. However, there is a lot of Physiomedicalist literature discussing the use of catkins specifically from the black willow (Salix nigra) as an anaphrodisiac.


“...drank freely it proves a powerful anaphrodisiac, suppressing venereal desires for a long time, and is highly recommended in the treatment of spermatorrhoea.”
King's American Dispensatory


Utilitarian uses
Willow trees were used extensively for a variety of everyday uses. The wood has been used to make everything from drying racks to snow shoes to chairs to sweat lodge poles. Willow wood is pliant in the spring, making a wood that bends well.


Here is a willow basket that a friend made for me (filled with mullein leaves and root). 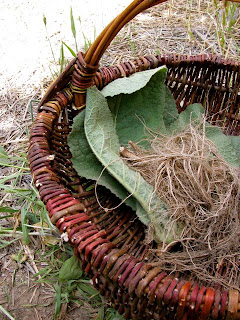 The bark of the willows make a great quick cordage. I’ve used it to lash things together in a pinch. In the past it was shredded and then woven into clothing. 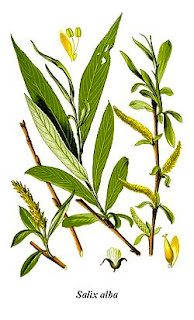 Willow trees grow in most northern latitudes and especially love riparian areas. There are about 400 different species in the Salix genus and they easily cross pollinate. With a basic understanding of botany you can easily recognize a willow tree, but knowing exactly which species can be a little tricky.


The trees themselves vary greatly in appearance, ranging from small spindly trees to large towering trees.


For medicinal purposes the white willow (Salix alba) and black willow (Salix nigra) are often used. Most willows are interchangeable, but have varying degrees of potency. This means that the necessary dosage might change significantly from tree to tree.


The King’s American Dispensary says the following...
There are numerous species of Salix, many of which, undoubtedly, possess analogous medicinal virtues. The best rule to follow is to select those whose barks possess great bitterness, combined with astringency. Among those which have been used are the S. alba, S. caprea, S. russelliana, S. purpurea, S. nigra, and S. pentandra. The Weeping willow, or Babylonian willow (Salix babylonica) is cultivated as an ornamental tree.


Willow leaves are often elongated and serrated, but can be oval as well. Most willows are deciduous and lose their leaves each fall.


Willows are dioecious plants, meaning that there are separate male and female trees. They can be distinguished by the different flowers or catkins.


Willows have the distinguishing feature of having one bud scale. A bud scale is a modified leaf that protects the bud.

Willow harvesting and preparation
Willow bark is gathered mostly in the spring and fall. The bark is best harvested from properly pruned branches. I like to gather the bark from the smooth willow branches.


The bark can then be dried for later use as a decoction or tincture, or used fresh in a tincture.
Dosages for willows vary depending on the person and the type of willow being used. It’s always a good idea to start low and slowly work up until the desired effects are achieved.


While willow is generally safe for most people it should be used with caution during pregnancy and breastfeeding and it is theorized that those who are taking blood thinning medication, beta blockers, diuretics, NSAIDs and dilantin should avoid taking willow bark. If a person is allergic to aspirin they may also have reactions to willow.


This monograph was originally published on HerbMentor.com in March 2011.
Posted by Rosalee at 8:39 AM