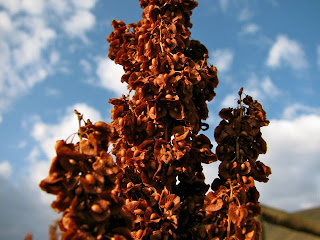 This pesky weed that is despised by so many offers us so many uses whether it be nutritious food, potent medicine, or even beauty in the way of a brilliant yellow dye or a unique flower arrangement.

Many of you are probably already familiar with the Dock species even if you haven’t met on a first name basis. The flower stalks of this hearty weed turn to a brown rusty color that jump out against the landscape in the late summer and many stalks are still visible in spring. Its leaves are lance shaped growing out from the base of the flower stalk. Sometimes the leaves are curly at the edges, giving it its popular name “Curly Dock.” There are about 25 species of Dock in the North American continent – some have been imported from Europe.

In the early spring dock leaves are some of the first wild edibles to appear, sometimes even poking out of the snow. At this young stage these leaves and tender and delicious! Besides being high in iron the leaves also contain significant levels of calcium, potassium, beta carotene. They have a slight lemony twang to them, which indicates the presence of oxalic acid. (Which is also found in beets, spinach, and rhubarb leaves.) Because of the oxalic acid found in dock leaves it’s not recommended to eat large amounts of raw greens. 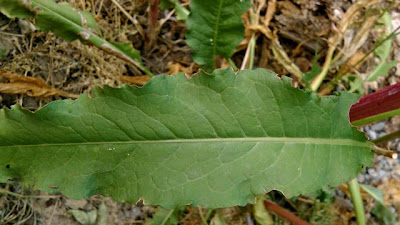 Leaves as food and Medicine
The young leaves are a wonderful spring green. You can eat small amounts raw in salads, or cook them in soups or quiche. Because the leaves contain oxalic acid it’s best not to overeat them raw, and avoid them completely if you have a history of oxalate kidney stones. The leaves are slightly sour when young, becoming increasingly so as they get older.

The cooling and astringent leaves can be used topically to reduce swelling from irritations. I’ve used them on cold sores with varying results as well as stinging nettle rashes with better results.

Yellow Dock Frittata
This breakfast can be made with any wild greens, but yellow dock gives it a nice lemony taste.

Peel and finely chop the potato. Sauté onion in butter until tender in a cast iron skillet. Add the potato and sauté for about 5 minutes. Whisk eggs, cream, basil, cheese, mustard, salt and pepper together in a bowl. Add the yellow dock greens.

Preheat the broiler in your over.

Add the egg mixture on top of the potatoes and onions. Cook on low heat on the stove top for about 10 minutes until the bottom of frittata is set, but top is still runny.

Put skillet under the broiler for about five minutes or until the top portion is nicely browned. 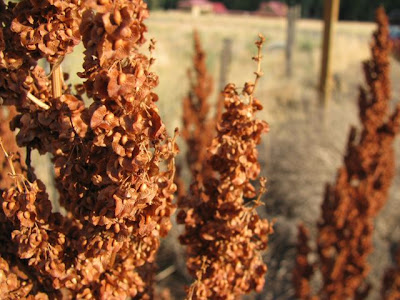 Seeds as food and decoration
During the spring and summer, long green flower stalks spring up from among the leaves. By June they are fully formed and by July or August they are abundant rust colored seeds. These are easily recognized in fields and growing alongside the roads. They seem to beckon me each year to harvest the bounty.

To harvest the seeds I cut down the seed stalks and place them in a paper bag. I then keep this bag on its side and leave it outside overnight. You’d be amazed at all the creatures that make their home in the yellow docks seeds. I encourage them to leave peaceably in this way.

The next day I pick through the seeds removing any debris and old leaves. These seeds can then be ground with a mortar and pestle or in food processor.

Why go to all this trouble you ask? Why dock seed crackers of course. My mentor Karen Sherwood taught me this recipe and years later it’s still a favorite in our house.

Dock Seed Crackers
Ingredients:
one cup of dock seed flour
one teaspoon of salt
and one cup flour of your choice. (My favorites are whole-wheat pastry flour and rye flour.)

1. Mix in enough water to make pliable, but not sticky dough.
2. On a well-floured surface, roll dough as thin as possible. Cut into desired shapes or transfer it whole to a well-oiled cookie sheet.
3. Bake for 10 -12 minutes at 350 or until crisp.
4. I love these hearty crackers with goat cheese.

The flower stalks also make a fabulous addition to flower arrangements. You can use them when they are green, or later when they are fully mature. I’ve seen them placed with other flowers or even as decoration on their own. 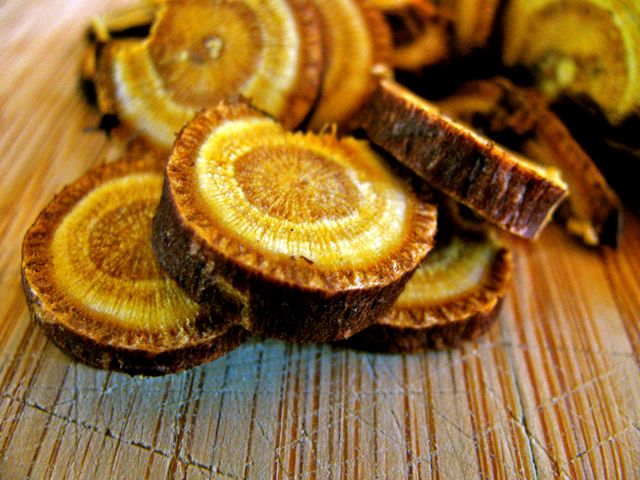 Roots as medicine, dye and fairy tables
As far as medicine goes, the root is the most commonly used portion of yellow dock. I harvest the roots in the late summer and early fall. They like to grow in hard rocky soil. (Or maybe we just have an abundance of hard rocky soil and it happens to grow there.) In either case I have found that a digging stick is oftentimes more helpful than a shovel in getting the roots up.

The root is a long taproot that has a brown outer covering. Underneath this brown sheath is a brilliant yellow that will knock your socks off. It’s no surprise that this was traditionally used as a dye. When you slice the root you will find growth rings similar to a tree. By counting the rings you’ll discover how old the plant is.

These brilliant yellow slices with beautiful rings rippling out make fabulous fairy furniture. You can create your own designs with a young friend. Although the color will fade as they dry, these slices can also be used as temporarily colorful earrings and necklaces.

Yellow dock root is bitter, astringent and cooling making it a great choice for clearing liver heat with signs of slow digestion that can include a lump or heavy feeling in the abdominals along with constipation. Generally described as an alterative, yellow dock (as are most alteratives) is indicated for clearing damp heat conditions.

Yellow dock root contains small amounts of anthraquinone glycosides, that are believed to stimulate the bowels as a laxative. Also being a bitter herb it helps to stimulate various digestive juices which in turn stimulates the peristaltic action of the bowels. Whether yellow dock acts directly on the bowels, or supports healthy digestion through its bitter properties, the result is a gentle effect to clear food stagnation and get those bowels moving.

It is also appropriate for damp heat signs in the blood that surface on the skin such as oozy, wet, red (hot), irritated rashes. I’ve read several accounts of it being used topically as a wash for ringworm.

It is commonly thought that yellow dock contains high amounts of iron and is frequently used for anemia especially anemia associated with pregnancy. There is a growing consensus however, that yellow dock does not actually contain large amounts of iron, but rather it helps the body to better utilize iron. When we view yellow dock in this fashion it makes sense to combine it with nettle leaf or to make a concoction of the root with an equal part of black strap molasses added.

Here's a video about making this type of preparation:

Rich in minerals yellow dock infuses well in apple cider vinegar. This can be used as a base for salad dressings, or simply taken before meals to aid digestion. Additionally it can be taken to relieve food stagnation and constipation following a meal.

I love to love yellow dock. It is abundant, easy to harvest, and has such a rich history of use for practically every portion of the plant.


This post is part of the Wild Things Round Up. Visit this link for a lot of really scrumptious and creative recipes for dock!