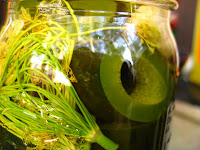 Pickled kelp is one of my favorite treats. I learned about harvesting and processing kelp, Nereocystis luetkeana, from my mentor Karen Sherwood of Earthwalk Northwest. Her 5 day Coastal Foraging class is absolutely spectacular and this is just one of the many culinary delights students learn and prepare in class.

For our first wedding anniversary we planned a trip to Canada to see a friend as well as the famous anthropology museum in Vancouver, BC. From there we headed to Lopez Island off the coast of WA state for several days. Originally I had planned on harvesting some kelp fronds for drying and some bullwhip kelp stipes for pickling. One night before falling asleep I had a great idea. Let's can 50 jars of kelp! And thus our anniversary vacation turned into a working vacation. :)


Kelp is very mineral and vitamin rich. I think of eating even a small portion of kelp each day as a better alternative to taking a multi-vitamin. Kelp is especially important for those of us with a low thyroid function as the high iodine amounts help to nourish the thyroid. Often called the world's most perfect food herbalists from Susun Weed to Ryan Drum tout it's far reaching health benefits. We eat dried kelp daily in our gomasio, or in seaweed cookies another favorite treat. I also throw kelp into almost all the stews we make, and I put a small clipping in with dried beans while they are soaking. 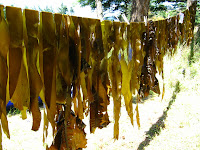 The picture to the right is various seaweeds drying in the sun.

To harvest kelp in good amounts you want to go at a low tide. We celebrate our wedding anniversary on the full moon in June and since full moons also present the lowest tides it worked out great. Following the tide schedule we kayaked around a couple of bays looking for healthy stands of kelp. I have only harvested kelp about five times, but in my experience it likes to grow next to rocky outcroppings and sure enough we found a very healthy stand on the side of a bay. All in all we harvested about 60 stipes and fronds, but the stand was so large it didn't make a dent in the overall numbers.

For those of you unfamiliar with kelp, it grows in large stands with a long hollow

tube attaching it to the bottom of the ocean floor. This tube floats on the surface with the kelp leaves or fronds trailing alongside it. If you have visited the ocean as a child you probably remember picking up those long hollow tubes and whipping them around as if you were a old time western bandit.

If you are only interested in harvesting fronds it's very easy to do so in a manner that illicits very minimal impact. Where the hollow tube (stipe) ends, you can see little attachments and then the fronds come out from there. By using scissors to cut the fronds a couple inches from the attachments you can be assured that the kelp will continue to grow.

To harvest the stipes is akin to harvesting the roots of a plant so great care needs to be taken to ensure you are harvesting from a strong stand. To harvest them my husband paddled around while I gathered healthy looking kelp into the kayak. I would heft the long heavy fronds into a bag, and then pull up the stipes. I quickly found a good balance in pulling hard enough to disengage the attachments, but not so hard that we capsized. I prefer harvesting the medium sized plants the best. I leave the young to continue growing and the older plants are very hard to pull up. 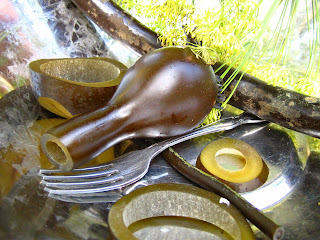 Once we have harvested what we need, we also fill up a bucket of salt water for rinsing the kelp later.

Back at camp we hung the incredible amount of fronds we had on a fence. Seaweed is one of the few herbs you actually want to dry in the sun. It's incredibly mucilaginous. If you don't mind being slimy placing the fresh fronds directly on the skin does wonders for sunburns. Cooling and moistening and draws out the heat - much in the same way fresh aloe does.

I wouldn't necessarily recommend pickling a large amount of jars of kelp while camping to anyone else. It was a lot of work, although I have to say, my husband and I had a lot of fun while doing it as well. Spending all that time outside, working side by side may not be the luxurious way to spend an anniversary, but it was meaningful and rewarding.

Here's a modified recipe I learned from Karen. Basically any basic pickling brine will do.

To begin, if necessary rinse the kelp stipes off with seawater (not fresh!). Cut them into tubes that will fit into sanitized wide mouth quart or pint mason jars. OR you can slice the rounds into 1/4 thickness. They look very pretty using the latter method, but you get more in the jar with the former. We cut them into tubes filling the larger tubes with smaller ones - really trying to pack as much as we could in there. 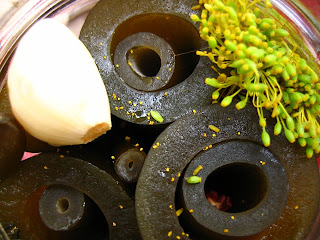 Along with the kelp place one clove of garlic, one cayenne pepper, and one sprig of dill in the mason jar.

In a large pot warm the vinegar, water, pickling salt, pickling spices and alum or grape leaves. Bring to a boil and pour the boiling brine over the kelp. Wipe off the rim and the sanitized lid, and screw on the cap. 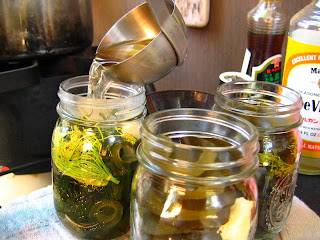 I like to eat a slice of kelp every day. We also like to serve it as an appetizer - filled with cream cheese and a sprinkle of paprika for flare.

You can use pickled kelp in the same ways you would use a pickle. On sandwiches, in tuna fish, or for making your own tartar sauce. If you are able to get to the coast I would heartily recommend making friends with this incredibly nutritious ally. 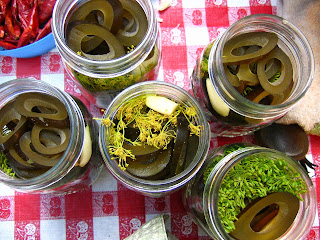 Thank you to Bob for the photos!

Kelp can be made into all sorts of delicious treats.

And don't miss this special seasoning blend, Sea Zest!
Posted by Rosalee at 10:39 AM