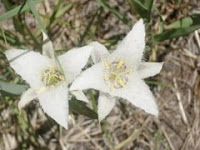 We recently had the incredible opportunity to house sit for the summer. Friends of ours had just built a brand new home and were leaving for the summer so the dad could be a ranger in the back country of Yosemite. We've only been there three nights but have so thoroughly enjoyed this special place.

The home was built entirely with a "green" mindset as many of the materials were resourced locally and many were recycled. The house is run entirely on solar power which is being stored in recycled batteries from cell phone towers. They have both a cook stove as well as a gas stove for the hotter months.

One of the best features of the house is its ability to regulate the temperature. It should remain 60-70 degrees year round. Yesterday it was over a hundred degrees outside - but it still remained in the mid 60's inside. I am currently blogging from out old house where it's 87 degrees inside - I think we moved just in time!

They have a very simple heating system that collects the heat from the roofs and stores it under the house. The collected heat will then diffuse over the winter (where it often goes below 0 degrees) to m 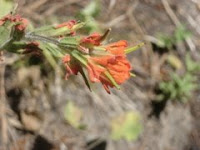 Being in a solar powered home has really raised our consciousness to the amount of energy we use. Lights are never left on, and the few electrical appliances we use are kept to a minimum and only during daylight hours.

In the fall we hope to have enough money saved to move into a geodesic dome. At that point we'll waive goodbye to electricity all together, so this is a nice way to transition ourselves.

(We do all of this in the effort to take responsibility for our actions. We've become tired of complaining about the dams destroying the salmon runs... for us it's important to live in a way that doesn't support the need to have the dams in the first place.)

For those of you unfamiliar with the Methow Valley we have moved from the Valley floor to the mountains. Instead of sagebrush we have pine trees and douglas firs. As you'll see below the flowers are still blooming as well.

The previous pictures are of Mariposa lilies and Indian paintbrush.

The following pictures are of our new home as well as some shots from a hike we took yesterday. 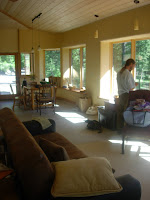 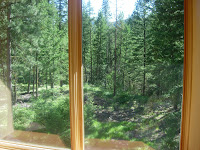 View from the front window 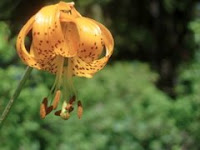 Tiger lilies are blooming in the mountains. I haven't found reference to medicinal uses of this beauty, but you can eat the bulbs. 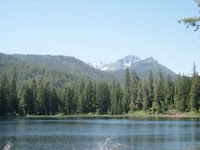 Photo of Black Pine Lake - a short distance from our house. 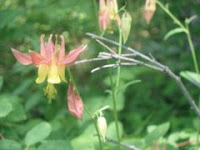 Didn't see many columbines, but they were a welcome sight. 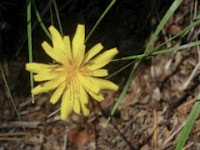 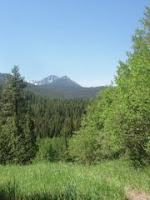 One more view shot. I live in a beautiful place!