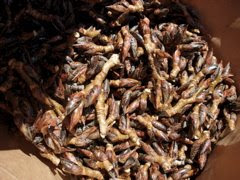 I couldn't sleep early this morning - something that rarely happens. As my mind was wandering over hills and through valleys I was suddenly hit with an idea, or rather an afterthought of sorts. With so many downed trees in the area I should definitely take advantage of this bounty and harvest the bark. The bark can be tinctured to make an anelgesic medicine, and I was also interested in drying some bark to later pound into flour. 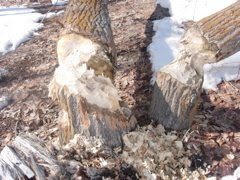 we noticed several trees down by the river. Apparently the beavers in the area have been hard at work.


Having never harvested cottonwood cambium before we were a little baffled about which part to harvest for flour. Eventually we decided that perhaps it's too early in the season and the sap isn't running yet. I've harvested cedar cambium before while the sap is running and it's really amazing how easily it separates from the tree - which was definitely not the case today. If anyone else has experience with this please let me know.

I do have a hard time imagining that the cambium would taste good as a flour. I put some of the bark in my mouth and it tasted like strong aspirin. Hence the tincture. :) This explains why the flour was used primarily as famine or emergency food.

Update: I did some reading on cottonwood last night and it does seem that we are a little early on harvesting the cambium. May or June sounds like a better time. I also read that although some tribes ate this food very rarely, other tribes (in Montana esp.) considered it a treat. (Thanks to Nancy Turner and all the research she has done with Northwest ethnobotany.) 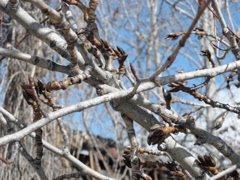 There was one really fresh older tree on the ground. We were able to harvest a lot more buds from the top of the tree, which is by far the most plentiful. I already had lots of buds from the other day, but I just couldn't resist. Although we had already been to the store, we went back before leaving town to buy a gallon of olive oil for a cottonwood bud infusion. I am teaching a class on oils and salves in a couple of weeks, so I know it'll come in handy.

I also wanted to make a tincture of the buds. I wanted to use a higher percentage of alcohol to extract properties from this resinous source, but only had a little tiny bit of everclear hanging around. (It's not sold in this state, so I am at the mercy of traveling friends.) So, I did one small tincture of half everclear, half vodka, and then another tincture with scotch whiskey. I'm curious as to the results. Already there is a big difference in colors. Surprisingly the everclear/vodka mix has a much darker and cloudier app 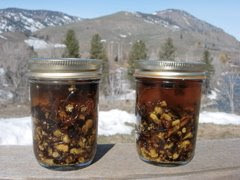 earance than the scotch whiskey (the one on the right is the everclear/vodka) which begins as an orange color. These tinctures will be used as an expectorant for nasty chest colds.

I also did a tincture of the bark in scotch whiskey as well.

I have only recently started making tinctures out of scotch whiskey. In part two of the Village Herbalist on Herbmentor, Heather says she uses scotch whiskey for her tinctures for several reasons. One, scotch whiskey is made from barley, which has it's own health benefits. (As opposed to wheat, which a lot of vodka is made from these days.) Also, she said to buy the cheapest scotch whiskey available. When taking a sip you'll notice the astringent properties of this beverage. This astringency, says Heather, adds to the extracting properties of the alcohol making it act more like 60%-70& alcohol. So, seeing how everclear is hard to get, I thought I'd give it a chance. I'd love to hear other thoughts on this.

The sun is setting in the valley which has turned several shades of pink, blue and purple. The bald eagles have been busy feasting on the fallen deer in the field. We've really enjoyed watching so many up close right from our kitchen window. I am feeling very grateful to live in this beautiful bountiful valley.
Posted by Rosalee at 6:05 PM