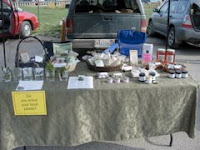 It's been an incredibly busy weekend. First, I was selling my herbal wares at the local farmer's market on Saturday morning. This week I had a table set up for people to identify local plants that was really successful and fun. I simply put some plant cuttings in cups, and then fixed a label to the backside stating the common name, botanical name, family, and some edible, medicinal, and utilitarian uses for each one.

I had yarrow, dandelion, yellow dock, mallow, mullein, and oregon grape out. Most people got dandelion, but the rest were not so easy! People were absolutely amazed you could eat some of them, or that 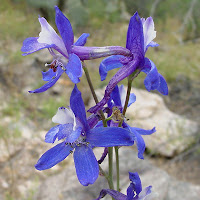 yarrow is such a powerful medicinal (it grows everywhere here). It's so surprising to me that what I know isn't common knowledge!

Directly after the market I went up to Patterson Mountain to lead a native plant hike. I was worried headed up there that I would be too tired after such a big morning to lead the hike well, but I think it went great! I spoke a lot to the edible and medicinal uses of many of the plants we saw. There were lots of wildflowers out and over the next week I will be posting more about each one.

The beautiful picture above is of larkspur or Delphinium spp. It belongs to the buttercup family and is highly toxic to humans and cows. Apparently sheep aren't bothered by it. It's a very striking flower - the showy part is actually 5 sepals with the actual flower being in the center. After seeing it up on the mountain we found it growing on our property as well.
Posted by Rosalee at 5:27 PM