Combining Sweet with the Sour: Oxymels 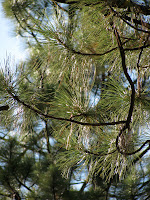 Oxymels are preparations using both vinegar and honey. These mixtures have a long history of use in western herbalism, dating as far back as the ancient Greeks.

Hippocrates spoke highly of oxymels for coughs but cautions against its use for people with a cold and dry constitution (these people are commonly always the coldest in the room, wearing sweaters when others have on t-shirts, and may have dry skin, dry eyes, etc.). He

also suggested heating these mixtures gently when they are being consumed during cold weather.

Honey in itself offers us a wide range of benefits for coughs and sore throats. It’s anti-microbial, inhibiting the growth of pathogens as well as slightly expectorant. As most of us know, a spoonful of honey can soothe a sore throat.

There are a variety of ways to make oxymels. In this article we’ll explore these different preparations as well as different herbs to use.

Decoct one ounce of herb in one quart of water, simmer until ¼ of the liquid remains. Strain and add four ounces of vinegar and four ounces of honey. Mix until it forms a syrupy consistency. This preparation works best with roots or leaves. Because of the long decoction it is not well suited for aromatic herbs because the simmering will boil away the volatile oils.

If wanting to use aromatic herbs (those in the mint family for example) you can simply combine an herb-infused vinegar with an herb-infused honey. I would suggest the ratio of one part of vinegar to three parts of honey. You can determine ration of honey to vinegar to suit your own tastes.

Lastly, another variation of oxymels is to simply decoct the herb of choice with vinegar and then add 5 parts of honey to each part of vinegar.

I recently made an oxymel preparation similar to example number 3 using fresh pine needles harvested from near my cabin.

You can follow the steps in this photo essay keeping in mind that many different herbs could be substituted for the pine needles. Ginger, onion, garlic, elecampane, cottonwood buds, and grindelia all come to mind.

This time of year most plants are slumbering in winter dreamland. I live in the middle of a pine and douglas fir forest however and so evergreen needles are a constant source of fresh plant material. Many evergreen needles are a stimulating expectorant, which lends itself well to insistent wet or mucous producing coughs. I would not use pine needles or an oxymel preparation for dry hacking coughs. Pine needles are also a good source of vitamin C, giving us another reason to use it during times of illness. 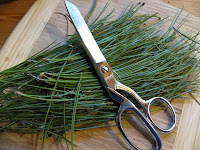 To cut the needles into small pieces I suggest using scissors, as it is much easier than cutting with a knife. 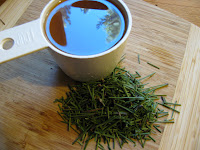 Add a generous handful of needles to one cup of organic apple cider vinegar.

Simmer this mixture gently. If at any time it turns into a vigorous boil, turn down the heat so that it simmers once again. 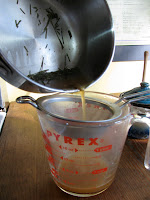 After the liquid is reduced by half, strain off the needles. 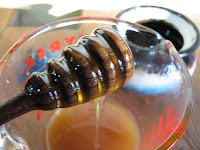 Add honey to the pine needle vinegar. Many oxymel recipes call for five parts of honey for each one par

t of vinegar. So, if you have a ½ cup of vinegar you would add 2 and ½ cups of honey. You could add less if this seems too sweet to you.

Stir this mixture well until the honey dissolves into the vinegar forming a syrup consistency. We keep our oxymel preparations in the fridge and take it by the teaspoon to tablespoon when experiencing sore throats or wet productive coughs. This mixture should keep for a long time in the fridge.